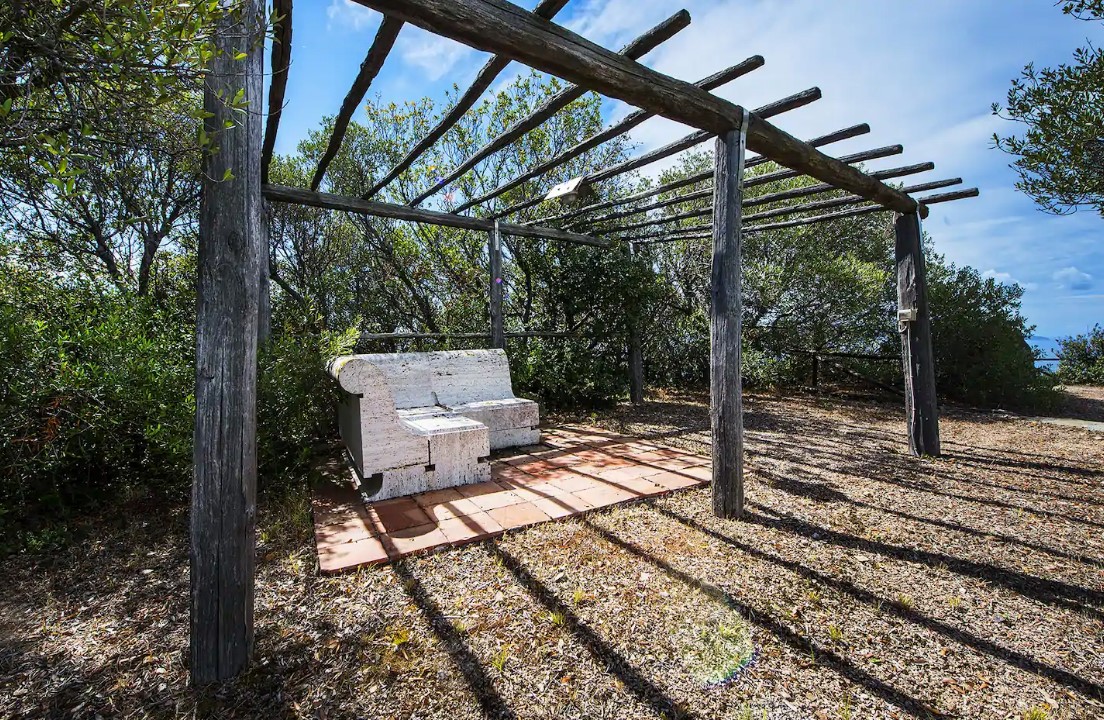 “The Thinkery” by Tommaso Gismondi

In the green of the gardens of the Villa Approdo del Re in Tuscany – Monte Argentario – you can catch sight of an extraordinary work of art, a sculpture in travertine conceived for the place in which it is situated and for the visitors who will admire it: Il Pensatoio (the thinkery), realized by the sculptor Tommaso Gismondi. The seatback with soft and curved shapes combines with an angular seat presenting squared and sharp-cornered lines, playing with the robust material that composes the work. The title of this sculpture expresses its function: not only an artwork to admire aloof, but also a functional element that makes the beholder, seated whilst thinking, an active part in the realization of the work itself, contributing with his actions to fulfill its purpose.

The famous sculptor Tommaso Gismondi was born in Anagni in 1906 and moved to Rome with his family when he was a child to become one of the greatest sculptors of the 20th century. He spent a period of his life in Buenos Aires in Argentina, to eventually settle down in Anagni in the 1950s, where he opened his own studio in an ancient building of the town. He became famous as the “Sculptor of the Pope” because he realized some art pieces commissioned by Pope Paolo VI and Pope Giovanni Paolo II. Worthy of mention, the doors of the Vatican Library and of the Secret Vatican Archive (1985), as well as various bronzes of the Basilica di San Pietro, the Chair of Giovanni Paolo II, the Via Crucis, the box for the keys of the Holy Doors in S. Pietro, S. Paolo, San Giovanni and Santa Maria Maggiore, the statue of San Giuseppe situated in the courtyard of the Vatican Library, and the coins of Paolo VI for the Holy See. In the Basilica di San Pietro, Tommaso Gismondi realized also an altarpiece in bronze for the Europa chapel, whilst, in the Basilica di Assisi, he produced four of the 22 tiles of the bas-relief in bronze of the altar in the chapel dedicated to the Virgin Mary. He worked also as designer of coins for the Vatican. In the 1970s, he built his own foundry, where he could work in total autonomy on his monumental bronze sculptures. Tommaso Gismondi realized works not only in Italy, but all around the world: from the bronze portal for the most ancient church in Paris, Saint Pierre in Montmartre (1975), to the bronze door of the Cathedral of  Nuestra Senora dela Alta Gracia in Santo Domingo (1988). Many of his masterpieces, also in marble or on canvas, are preserved in museums and collections throughout the world (France, England, USA, South America, Spain). Tommaso Gismondi died in Anagni in 2003, and his studio became a museum with a permanent show of his works.

“My primary purpose has been to love this job fully, passionately, in all its manifestations, in all its techniques”, the artist expresses concerning his love for art, which has made his artworks stunning and unique. The atmosphere of peace and relax spread throughout the Tuscan natural environment is concentrated to the fullest in the vast gardens of the Villa Approdo del Re, where the wonderful sculpture Il Pensatoio by Tommaso Gismondi finds an ideal home and becomes an essential part of the guests’ daily experiences during their stay.

Your cart is empty.

Find out more or adjust your settings.

This website uses cookies so that we can provide you with the best user experience possible. Cookie information is stored in your browser and performs functions such as recognising you when you return to our website and helping our team to understand which sections of the website you find most interesting and useful.

Strictly Necessary Cookie should be enabled at all times so that we can save your preferences for cookie settings.

If you disable this cookie, we will not be able to save your preferences. This means that every time you visit this website you will need to enable or disable cookies again.