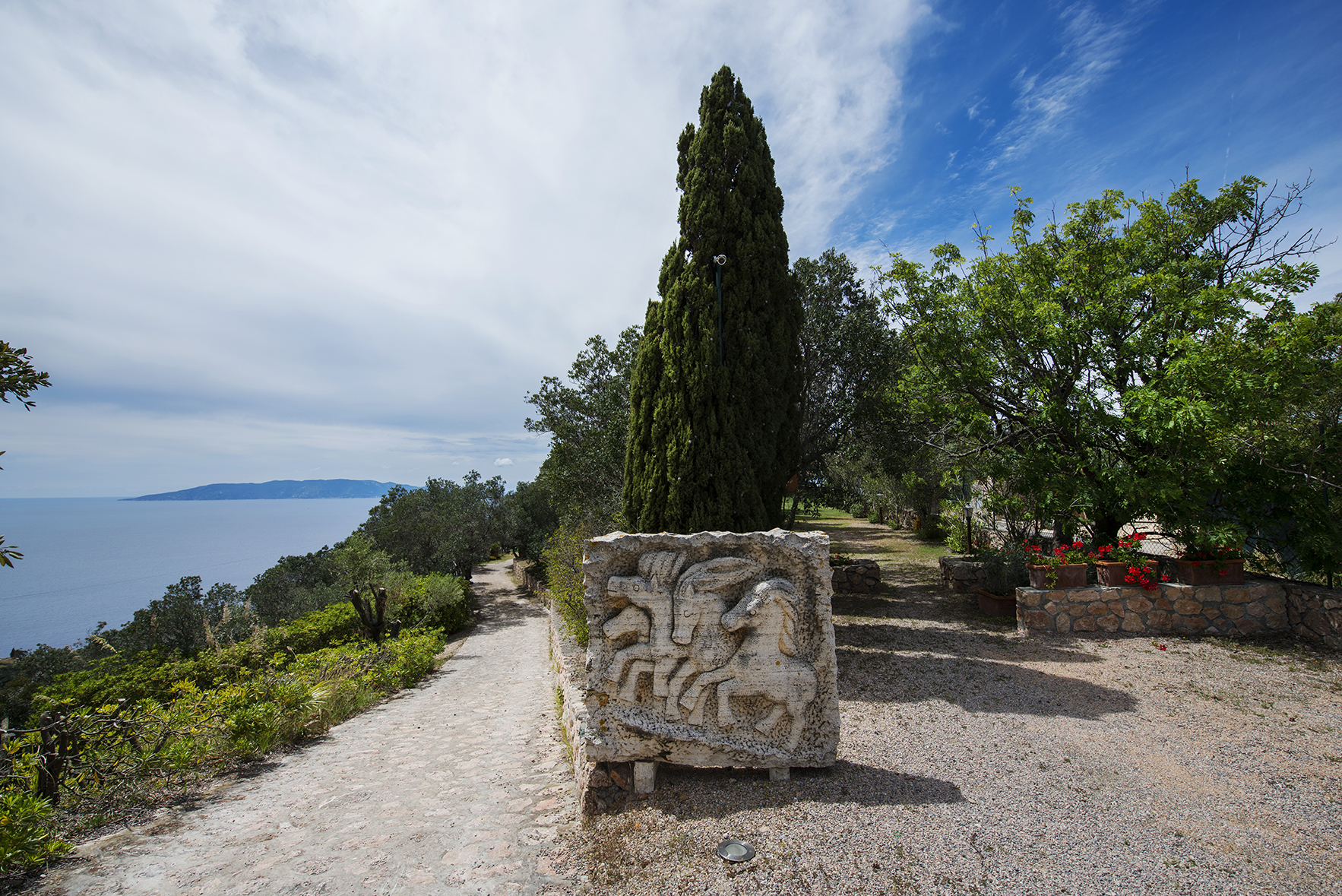 An extraordinary sculpture realized by the sculptor Tommaso Gismondi is situated in the vast outdoor spaces of the Villa Approdo del Re in Tuscany, immersed in the green of the Mediterranean vegetation. The work of art is a high relief in Roman travertine, representing four horses that overlap in diagonal. Their heads, with the horsehair in the wind, and their legs, each in a different position, create an effect of animated dynamism, though asynchronous. The lacking uniformity in their movements, apparently chaotic, of the four horses conveys a strong sense of freedom. The horses, caught whilst running freely with no bridles or saddles, thus in their purest and wildest states, become symbols of uncontrollable power, strength, speed, and energy. The scene is delimited by a frame in rough travertine, which rejoins the artifact to the natural element it is made up of. The suggestive work of art “Cavalli”, with its beauty and simplicity, placed at the Villa Approdo del Re, embodies perfectly all the artistic passion and style of Tommaso Gismondi, an eclectic artist, who realized sculptures, coins, medals, sketches, paintings, and drawings of any kind and subject matter, from a horse in movement to a sacred scene, making his art everlasting and dateless.
Born in Anagni on the 28th of August 1906, he moves to Rome in 1921, seeking fortune. He attends the Istituto d’Arte Sacra at Santa Maria Sopra Minerva and the Istituto d’Arte e Accademia di San Luca, demonstrating from this point forward all his artistic talent. He has then attended for three years anatomy classes at the medical science department in Rome and art history classes at the literature department. His early works date around 1928, when he experiments with his style and technique, making copies of important statues at the Vatican Museums. These first experiments attest his great skills to translate, with his art, reality into matter.
Since 1932, he has been commissioned a series of artworks that have made him achieve success and public esteem. Worthy of mention: the “Pieta” for the Urbini’s family tomb at the Primaporta cemetery in Rome and the Adamoli tomb at the Verano cemetery. The 1970s are the most prolific years: he realizes more than thirty works only for the Vatican, among which many portals, the Last Supper for the Abbazia Domenicana di Santa Sabina in Rome, and coin models for the Holy See. In this period, he builds his own foundry in Anagni to accomplish all the important commissions. He dies in Anagni on the 27th of April 2003, bequeathing many artworks spread all around the world (France, UK, USA, Latin America, Spain).
“My primary purpose has been to love this job fully, passionately, in all its manifestations, in all its techniques”. With these words, the artist describes his love for art, which has made his pieces magnificent and one of a kind. In particular, “Cavalli” is an engaging work of art, which finds a home in an ideal place: at the Villa Approdo del Re, the research for elegance, beauty and harmony culminates with this art piece. The stay at the Villa offers the unmissable opportunity to gaze at the artwork “Cavalli” and to relish all the emotions it awakens.

Your cart is empty.

Find out more or adjust your settings.

This website uses cookies so that we can provide you with the best user experience possible. Cookie information is stored in your browser and performs functions such as recognising you when you return to our website and helping our team to understand which sections of the website you find most interesting and useful.

Strictly Necessary Cookie should be enabled at all times so that we can save your preferences for cookie settings.

If you disable this cookie, we will not be able to save your preferences. This means that every time you visit this website you will need to enable or disable cookies again.